This game is made for the VimJam 2 with the theme On The Edge and a limitation of Boss.

You are an aircraft fighter who will determine the fate of your own country, East Blue, against West Green, within this final sky battle. Good luck, soldier.

There are a lot of references I take in the game. Good luck getting what they are.

I have a few criticisms though. Wish you could see where your mouse cursor was, it makes it a little harder to control when you're not totally sure where the mouse is. Also if the plane could feel a little snappier in its movements that would be awesome! Even if that was balanced back out by the enemies moving faster. I cannot get past the yellow planes, I may try again later but the bullets following you are very difficult, and they're hit boxes are very small. When those tracker bullets pile up they're near impossible to avoid. The exposition dump at the beginning is mildly inconvenient for trying to play quickly. I skipped it mostly, but that still takes a bit. I think I would be more interested if it were in it's own menu item like "Lore" instead of being in the way of fast paced game play. I feel if everything slightly faster it would feel way better to play.

Love the music too! 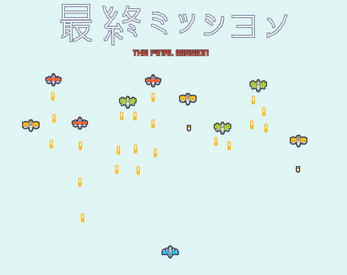